Carrara and its People

STORIES OF CARRARA
GUIDED WALKING TOURS TO THE HISTORIC CENTER

The guided tour of the historic center is a fascinating journey through the medieval, the Renaissance to finish with the nineteenth century Carrara. 1000 years of economic, social and urban history of the “Marble Built Town”.

The history of Carrara, its economic and urban development, go hand in hand with the history of its marble. The extraction began in Roman times but at that time Carrara did not exist, or rather there was certainly a small settlement there, but the Roman town of reference was Luni (today it doesn’t exist anymore).

We begin to mention Carrara in some documents of the 10th century A.D. but the marble caves are still not mentioned. They are mentioned for the first time a century later, and we could say that since then Carrara began to prosper and develop thanks to the marble industry. The same material (the only one available) has been widely used for the construction of city buildings, for urban furniture and for its monuments. We can say that Carrara can be called “The Marble Built Town” because it was built and embellished through the centuries using only its white and shining stone.

Our journey through the centuries begins in the Middle Ages (XI-XII-XIII century) when our marble began to be requested by the great and rich cities of the time: Genoa, Pisa, Lucca, Florence, to build and embellish their churches and palaces. The town of Carrara, already at the beginning of 1200, was organized as a free Commune, gradually developed around the Duomo along the Via S. Maria, together with other small neighborhoods across the river. 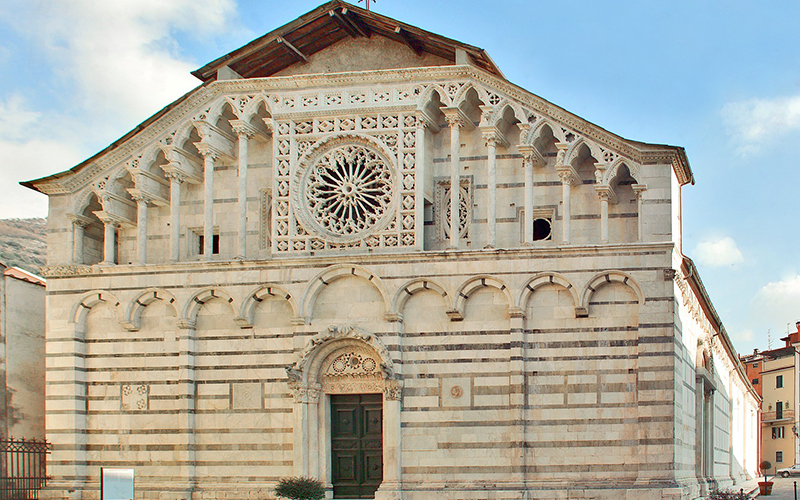 It took 3 centuries to complete it, entirely made (not covered) in blocks of marble, the Duomo of S. Andrea and the square in front remained the beating heart of city life even when at the end of 1400 Carrara passed into the hands of the Malaspina family.

Throughout the 1500s the Malaspina consolidated their control over the city but above all over the marble industry, relying on a group of noble families that provided them with the economical means to consolidate their power in the city by transforming Carrara from a free Commune into a typical Renaissance Signoria  headed by the Malaspina dynasty. The government of this family over Carrara and its twin town Massa lasted practically until the unification of Italy (in the mid 1700 Carrara and Massa were annexed to the Duchy of Modena for dynastic reasons).

The white marble of Carrara continued to be in great demand, and it is interesting to note that in this period also the urban layout of Carrara changed radically, the Malaspina in fact created the Alberica Square (the name derives from Alberico Cybo Malaspina) surrounded by an imposing series of noble palaces built between the mid ‘500 and the mid ‘600 where the families of the notable citizens lived. This square became the new political and economic center of the city at the expense of medieval neighborhoods. The Malaspina also brought running water to the city, widened the walls, paved streets and squares, promoted the construction of new churches in accordance with the Counter-Reformation prevailing in Italy, all this in order to give prestige to the city and consequently to the ruling dynasty. 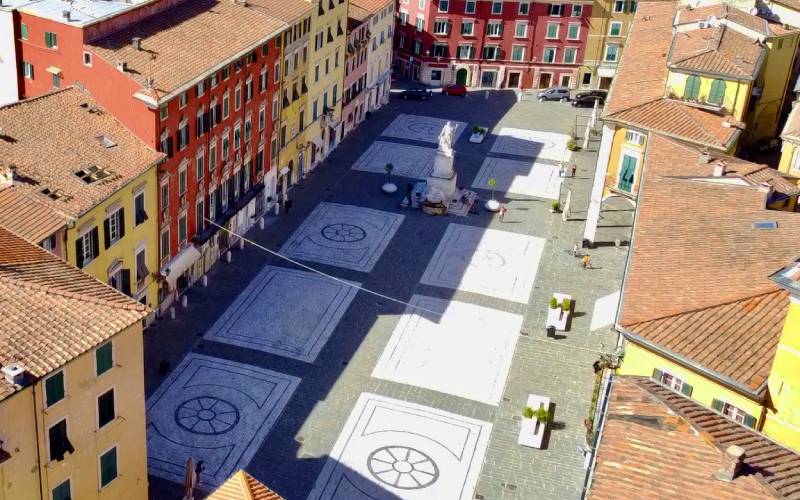 This urban layout remained practically untouched until the Unification of Italy (1861). This period corresponds to the abolition of noble privileges, which for centuries had cast plaster on the city’s economy, this wave of freedom benefited many new families, often of quarrymen coming from the marble valleys, rose to the spotlight of the city’s economy. They financed the construction of new neighborhoods that occupied the eastern part of the city outside the ancient walls that were demolished to make way for new streets and neighborhoods. Many new private and public buildings date back to this period  such as the Animosi Teather, the Politeama, the Chamber of Commerce, the Bank of Italy, schools, and many private buildings (villas, apartment buildings). Two new communication routes were opened: the Marble Railway, which connected the marble quarries to the sawmills and to the port; and the avenue XX Settembre still today the main road that connects the historical center to Marina di Carrara. 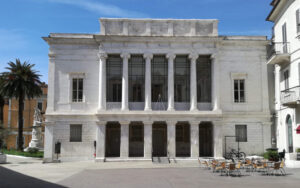 We end with a nice walk through the historic center of Carrara. Here you will find some proposals to visit the city and its territory.

We will do our best to reply in 24 hours

You can find out more about which cookies we are using or switch them off in settings.

This website uses cookies so that we can provide you with the best user experience possible. Cookie information is stored in your browser and performs functions such as recognising you when you return to our website and helping our team to understand which sections of the website you find most interesting and useful.

Strictly Necessary Cookie should be enabled at all times so that we can save your preferences for cookie settings.

If you disable this cookie, we will not be able to save your preferences. This means that every time you visit this website you will need to enable or disable cookies again.

This website uses Google Analytics to collect anonymous information such as the number of visitors to the site, and the most popular pages.

Please enable Strictly Necessary Cookies first so that we can save your preferences!